Flour Bakery's pumpkin pie recipe is the perfect blend of pumpkin and spices in a homemade flaky crust.

I think its the cool fall air and leaves falling everywhere to the ground that is turning my thoughts toward warm pumpkin pie and thank goodness for Flour Bakery's super pumpkiny pie recipe.  When you want to follow a pumpkin pie recipe from scratch, this is the best I've found. I usually use pre made crust (think Pillsbury), but in my new mode of challenging myself with all things cooking and baking, I made my own pumpkin pie crust from scratch!  Woo hoo.  Joanne's book explains techniques in such an easy to understand, non-threatening manner.

Just follow step by step, and you'll have a delicious crust.  I'm not scared of making crust now - I want to try Joanne's homemade pop tarts next using the Pate Brisee II.

This recipe also taught me how to properly cook the crust before filling with the pumpkin mixture.  After pressing the dough into the pie pan, you will place a piece of parchment paper on the dough and then add a "weight" to the dough.  The suggestion in the book is beans or rice.  I went with about a half cup of rice and it worked well.  By adding this step to your pie making routine, you will avoid a soggy bottomed pie crust.  My crust turned out perfectly flaky and slightly crispy.

Tips for this pumpkin pie recipe: Joanne talks about how when she opened Flour Bakery, she had never made a pumpkin pie before.  She wanted to really taste the pumpkin flavor when creating a pumpkin pie recipe for her bakery.

By cooking the pumpkin, brown sugar and spices for 40 minutes on medium low heat, you create a pumpkin paste that creates a stronger pumpkin flavor for the finished pie.  This is a relatively easy pumpkin pie recipe that I am certain you will enjoy for this upcoming holiday season.

I like pumpkin pie recipes with condensed milk and its included in this one.  The condensed milk adds an unbeatable creaminess that reminds me of holiday baking.  Love, love, love.

This is a keeper and why its earned a spot on Five Silver Spoons. 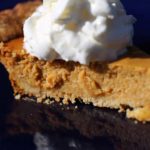