Original homemade nilla wafer banana pudding recipe that is easy to pull together and delicious beyond words! Fresh pudding, bananas, and Nilla Wafers warmed up - the best!

For another delicious banana recipe, you should try Banana Bread with Sour Cream or Banana Pecan Muffins. In the mood for another pudding dessert idea? You should try our Butterscotch Pudding.

I wanted to go old school, and just try what has worked for decades. This recipe does not disappoint.

There's something so soothing and familiar about homemade banana pudding with Nilla wafers. My Mom made this for us growing up and, in college, the cafeteria always had a fresh banana pudding ready for us every Thursday.

It was always perfectly warm with just the right amount of pudding, fresh bananas, and Nilla wafers, waiting to be scooped into your bowl.

Ingredients you will need for this Nilla Wafer Banana Pudding:

The photo above shows the Nilla wafer banana pudding before the final layer of pudding is scooped on top. Then, its time to bake it in the oven. It's so pretty, don't you think?

It looks like a Vanilla wafer banana pudding pie after serving it on a plate or in a bowl. With the meringue atop the layers of bananas, pudding and Nilla wafers. So, so good.

I hope you enjoy this classic recipe for banana pudding as much as we did. 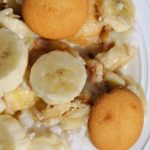 Note:  Since you need to end the layering with pudding, you will need 4 layers of pudding and 3 layers of wafers and banana slices.  So, plan accordingly, when you cover the bottom of the baking dish with the first round of pudding.