Pumpkin spice cupcake recipe with cream cheese frosting from DC cupcakes. So delicious. The maple in the frosting knocks the taste out of the park. , by the founders of Georgetown Cupcakes and stars of "DC Cupcakes".

I love all of the flavors incorporated in these pumpkin spice cupcakes.  Cinnamon, nutmeg, allspice, honey, and maple syrup.  The cupcakes taste like the quintessential Fall time treat.  The maple cream cheese frosting is perfect with the rich pumpkin taste of the cake. I cannot believe I have been through as many Falls as I have without tasting this combo. My family devoured them.  Next time, I want to create maple fondant leaves to adorn the top of the cakes.  Alas, my time ran out this round, and the cupcakes disappeared before the fondant leaves hit the production line.

If you enjoy pumpkin desserts, you should check out these too: 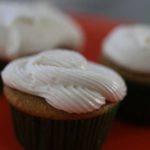