Pumpkin Torte Recipe with crunchy pecan crust and a streusel topping. This is a delicious twist on the traditional pumpkin pie.

This pumpkin torte recipe is so scrumptious with a crunchy pecan crust and streusel topping.

I had never thought about messing with my traditional pumpkin pie, as it's my favorite pie in the whole world.

But, I have to say, adding streusel topping on top of the rich pumpkin filling that tops a crunchy pecan crust is something special.

Ingredients you will need:

How to make Pumpkin Torte?

This torte reminds me of a pumpkin cheesecake or pumpkin tart. The crust is what you would expect in a cheesecake or tart, but the filling is a pumpkin pie filling. SO good! 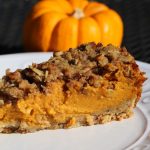 Adapted from Once Upon a Chef