Vanilla cupcake recipe from scratch that is super moist, simple to make, and one of my family's favorite desserts. Vanilla cupcake recipe with milk chocolate frosting, all from scratch, is such a treat.

I'm really enjoying reading The Cupcake Diaries cookbook by the owners of Georgetown Cupcakes and found this vanilla cupcake recipe in their fun book.

What grabbed my attention was the milk chocolate frosting.  That just sounded ridiculously delicious and something I needed to try right away.

If you've been following along, you know I am really enjoying using my new frosting bag as I mentioned with my chocolate cupcake recipe post.

This cupcake recipe was another experiment with my frosting bag and it did not disappoint.  Its so fun working with the bag to create pretty swirls and twirls of delectable frosting to place atop the delicious vanilla cake.  I'm excited to try other tips with different designs - I will share in future posts. This is the best moist vanilla cupcake recipe I've tried to date.  Maybe its the addition of 1 ¼ cups whole milk that makes them so moist or the extra dose of vanilla extract. The icing is super creamy and rich and milk chocolate - its tastes like a decadent milk chocolate bar - yum.  These will become a mainstay in our cupcake recipe reservoir.  I think I may be becoming slightly addicted to finding and making cupcake recipes from scratch.  You might see a few more cupcakes on this here blog in the very near future.

So excited - it just occurred to me I will actually be using this recipe again next week for my daughter's birthday, but with lots of pretty sprinkles atop.

If you enjoy cupcakes, you will most likely enjoy these recipes as well:

Here's a look at the cupcakes I made for my daughter's birthday: 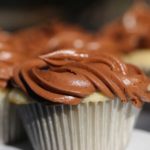