Fall is almost here and pumpkin recipes are calling. You might like to try Pumpkin Cobbler with Pecans, and Pumpkin Chocolate Chip Cheesecake Muffins.

I did not know that there was such a thing as baked pumpkin donuts until this week. So glad I'm in the know now, as these are delicious unique treats for the Holidays.

Before this recipe, I thought all donuts were fried and greasy.

Not the case. It IS possible to enjoy a healthier donut without giving up the delicious flavor.

These pumpkin donuts are so flavorful with pumpkin pie mixture spices, pumpkin puree, and cinnamon-sugar topping.

They are also really easy to make in just one bowl.

I also discovered the perfect recipe for a cinnamon-sugar topping from The Kitchn. The mix is ¼ cup granulated sugar and 1 tablespoon cinnamon. Yum. This is the mix I used for the topping in these healthy baked pumpkin donuts.

You can also use this recipe to make pumpkin donuts holes. You will just need, of course, a pumpkin donut hole pan. The baking time should be similar. Just watch it at the 10 minute marker. You do not want to overbake. They might cook a bit quicker with their smaller size.

If you don't have a donut pan or donut hole pan, feel free to make muffins with this recipe. The cooking time would be 20-23 minutes.

With both the donut holes and the muffin versions, you would let them cool for 5 minutes in their pan on a wire rack, remove from pan and roll in the cinnamon-sugar mixture while still warm.

I'm so glad I know how to make pumpkin donuts now. Such a fun treat to share. 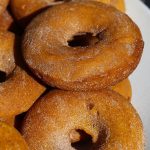