How to Make Authentic Texas Chili with beef and no beans. This traditional recipe includes crushed tomatoes and for seasoning, several spices including smoked paprika. SO good.

For more soup and chili ideas, you might like Sausage Lentil Soup and Greek Lemon Chicken Soup. I was looking for a chili without beans and found Texas Chili.

Apparently traditional Texas Chili does not include beans, so I became interested in the Lone Star state's chili making ways.

And, I have to say, I love their chili style.  The focus is more on the beef, extra spices, and cooking on the stovetop for a long time, until the consistency of the chili is thick and rich.

And, oh yeah, there's a cup and half of amber ale beer mixed into the dish.  Gotta love it. Tips for this easy chili recipe: What does Texas Chili have in it?

Beef, crushed tomatoes, oregano, cumin, smoked paprika, chili powder, bay leaves, and amber ale beer are the main ingredients.  Beans are never included in authentic Texas Chili, and there does not seem to be any debate about that.

Why is Chili the state food of Texas?

In the year 1977, Texas named their official state food to be chili.  Apparently, Texas is the only state that can make a "real" bowl of red chili.  The definition of red chili is only beef, red peppers, and spices, no tomatoes. Above, you can see a beautiful overhead view of the delicious spices included in this chili: oregano, smoked paprika, chili powder and cumin.

I LOVE the smell of smoked paprika.  So glad to have finally discovered this spice.  You should try it too.  Its totally cool.

Hope you enjoy this chili as much as we did!!

SAVE THIS TEXAS CHILI TO YOUR "DINNERS" PINTEREST BOARD!

And, let's be friends on Pinterest!  I'm pinning delicious recipes all the time. 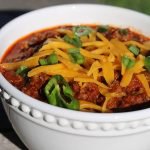 How to Make Authentic Texas Chili with beef and no beans. This traditional recipe includes crushed tomatoes and for seasoning, several spices including smoked paprika. SO good.