Moist Cinnamon Cake with brown sugar and sour cream swirled with Chai spices including ginger, cardamom, and allspice is such a treat.

I love breakfast foods most of all.  We have delicious sweet breads and coffee cakes here including Cinnamon Coffee Cake, Banana Bread with Sour Cream, and Moist Pumpkin Bread with Maple Icing. This is a CRAZY moist cinnamon cake that will knock your socks off with deliciousness.

I have called some of the recipes on my blog super moist before, but super was just not enough for this cake.  Crazy moist almost does this cake justice.

After the cake cooled, and I cut the first slice of the cake for my eagerly awaiting family, the knife revealed a soft, moist, and buttery cake.  And, I was super happy. I have made a cinnamon cake recipe from scratch before on many occasions, but this one, is THE one.  The one that will have a permanent spot in our coveted recipe vault for future Sundays, when we need a delicious coffee cake to enjoy for brunch time.

The addition of cardamom, allspice, and ginger give this cinnamon cake just the boost it needs to be catapulted into its own level of yum.

I feel like this is a modern cinnamon sugar coffee cake with the chai spices and all.  It makes me think of a delicious warm chai latte.

Serve your cake with cold glasses of milk or hot cups of coffee or tea.  However you choose to enjoy this one, will be the right way.  Its just so Darn Delicious. 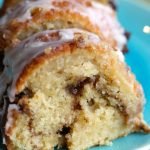 Moist Cinnamon Cake with brown sugar and sour cream swirled with Chai spices including ginger, cardamom, and allspice is such a treat.